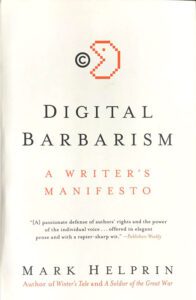 "After encountering a massive and at times organized opposition to what I had thought to be an innocuous newspaper article, I wanted to put into print (the very word now perhaps quaint) something that I hoped would outlast the digital frenzy. Without expecting to make the slightest headway with the keyboard gunners, my appeal was to a future sobered by the painful failures that digital culture as it exists today is sure to bring.