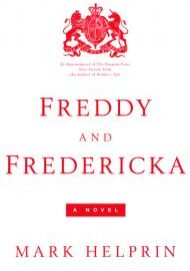 One of the oldest themes in literature is that of gods, heroes, and kings who go incognito into the world – Baucis and Philemon, the Odyssey, Henry V, The Prince and the Pauper, et al. And perhaps the oldest form of literature is the Romance . . . the dominant approach until the advent and triumph of realism in the nineteenth century. In the Romance one follows the protagonist from the paradise into which he was born (and from which his loss of innocence causes him to be expelled), through a rite of passage heavily laden with unlikely coincidences, doppelgangers, dragons to slay, chalices to find, etc., until his essential self – “blood will tell ”– extricates him from peril and returns him to the paradise he left, now changed and purified, ready to become the protector of a child, a new generation, or a whole people, who themselves will go off on a quest, continuing the cycle. The paradigm is apparent from the

story of the Fall through the Odyssey, the Divine Comedy, Paradise Lost & Regained, Tom Jones, and (without implying anything more than a similarity of approach), Helprin´s Refiner´s Fire, Winter´s Tale, and A Soldier of the Great War.

Mix the Romance form and the incognito theme and you have Freddy and Fredericka, which despite this infrastructure is first and foremost a comedy. Freddy is the Prince of Wales, Fredericka his troublesome wife. An overeducated, bumbling anachronism, Freddy commits one glorious gaffe after another, for which he is massacred daily in the British press. Golden-haired Fredericka is frivolous, empty-headed, and fond of wearing spectacular clothing with revealing necklines. Because of the epic public relations disasters caused by these wayward heirs to the throne, they are sent, in a little-known ancient tradition, on a quest to colonize a strange and barbarous land: America. In a tour (de force) of the United States, they parachute into the gleaming hell of industrial New Jersey and make their way across the country, riding freight trains, washing dishes, stealing art, gliding down the Mississippi, impersonating dentists, fighting forest fires, and becoming ineluctably enmeshed in the madness of a presidential campaign. Amid the collisions of their royal assumptions with their life on the road, they rise to their full potential, gain the dignity and humility required of great monarchs and good people, and learn to love one another.