Recollecting Dante’s Divine Comedy in the Novels of Mark Helprin. By Barry Craig and Sara MacDonald

Recollecting Dante’s Divine Comedy in the Novels of Mark Helprin. By Barry Craig and Sara MacDonald 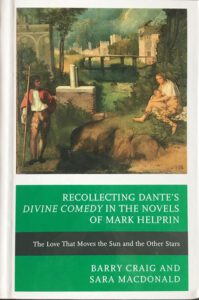 “In their own imitation of Dante’s Virgil, MacDonald and Craig rescue novelist Mark Helprin from the thicket of shallow misinterpretation and present him in all his philosophic depth while preserving his artistic splendor. Without a trace of didacticism, they explore some of Helprin’s major novels together with Dante’s Divine Comedy and portray how he and Dante speak to the same longings of the heart. Their pathbreaking study is no tendentious interpretation but a philosophic and imaginative inquiry and is unhesitatingly recommended for all who love Mark Helprin’s writing and serious students of the modern novel and classical literature.” —

This book studies several of Mark Helprin’s novels in terms of their relation to Dante’s Divine Comedy. The authors demonstrate that A Soldier of the Great War, In Sunlight and in Shadow, and Winter’s Tale substantially correspond to, respectively, Dante’s Inferno, Purgatorio and Paradiso. The author himself has acknowledged his debt to Dante and references to the Comedy appear throughout his works. It is not that Helprin’s novels track their Dantean antecedents slavishly, or even follow the structure of the Canticles explicitly. Rather, the central arguments of Dante’s three works are taken up by Helprin in his novels. In adopting Dante’s essentially Platonic doctrine of mediation, Helprin’s characters are fully instantiated human beings who also mediate and reveal the divine.

In his engagement with Dante, Helprin affirms the core philosophical, theological and psychological arguments of the Comedy, and then modifies those arguments in a distinctly modern way. Specifically, Helprin focuses on human freedom as the necessary precondition for justice to exist, both for individuals and for societies. In the final chapter of the book, the authors turn to Helprin’s Freddy and Fredericka. In this novel, Helprin both assumes Dante’s argument, and then radically alters it, by pointing to the possibility of a just regime on earth, rather than one that exists merely in heaven. While accepting much of Dante’s metaphysical argument, Helprin shows the virtues of liberal democracy as that form of political regime that is most able to unite human eros with eternal principles. In the end, Helprin’s novels are remarkable for the way in which they advocate ancient virtues, while insisting upon the distinctly modern liberal account of human freedom as the necessary foundation for human flourishing.