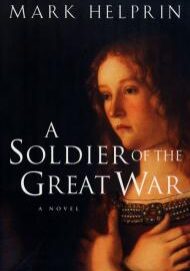 In the summer of 1964, Alessandro Giuliani, an old and partially lame professor of aesthetics —white hair and mustaches, white suit, cane— is thrown off a trolley on the outskirts of Rome after he comes to the defense of a young and semi-literate factory worker who has irritated the driver. Alessandro and Nicolò, the boy, decide to make the very long journey into the mountains, on foot, as a defiant pilgrimage away from those things –worthless and imposed–that people allow to take the place of real life. In their trying walk, the towns of Italy glittering below them in the warm summer air, the sea polished by a weightless fume of silver light the old man is moved to tell the story of his life: of a youthful paradise instantly shattered by the First World War, of how he lost one family, gained another, and lost it as well. The boy is enthralled by the war and its spectacular events, by Alessandro’s privations, heroism, and adventures, and by the extraordinary beauty of the story and in its telling.

At the end of the long walk, however, he comes to understand its deeper import, that love is superior to and greater than all the glories of civilization, but that each is heightened by the understanding of the other, and that even in the face of death, life can be made worthwhile if these things are made to run together seamlessly, like a song.