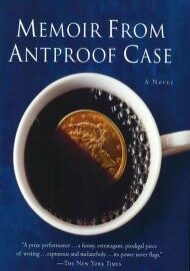 A roman à clef of sorts, Memoir From Antproof Case is the story of a narrator who never reveals his name even as he confesses the secret that has shaped his life. This life begins with the killing (in self-defense) of a man on a New York Central train, and following as the result, adolescence in a Swiss mental asylum; then of course Harvard (because parallelism is essential to literature); dangerous and exciting years as a fighter pilot in WWII; a career in investment banking; marriage to Constance, a gorgeous billionairess; divorce from Constance, a cruel and uncaring billionairess; the robbing of a huge amount of gold from a supposedly impenetrable vault; retirement in Brazil along with a new marriage, divorce, and the birth of a beloved son who is not his own. And all the while, he, of no name, sees as his chief enemy in the world, the force he must oppose, the evil he must conquer . . . coffee. Coffee is the instigator

of his many actions that lead him into many inescapable corners. But as odd as it may seem, the reason for this is one of honor upheld, loyalty not abandoned, and love unforsaken. The story is as compelling as the writing is exquisite and as, finally, the reverberations run deep.