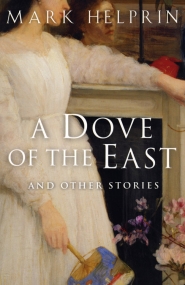 He had tried to explain for his sons the sense of mountains so high, sharp, and bare that winds blew ice into waves and silver crowns, of air so thin and cold it tattooed the skin and lungs with the blue of heaven and the bronze of sunshining rock crevasses. He had tried to tell them of the house in which he had lived, made of mountain rock, with terraces, and ten fires within. When shutters were thrown open and hit the stone like the report of a shell in an echoing valley, he could see mountains of white ice two hundred miles distant. The eggs there were milk-white, the milk like cloud. In winter it often snowed in one day enough to trap and kill horses and bulls. He had been a sawyer, guiding his saws through countless timbers all day long in the open air, so that his body was as intensely powerful as (he would say) gunpowder in a brass casing. Then, when he was younger and worked at the timbers, he could by the pressure of his hands and arms break a heavy iron chain. And there was not much else, at least as he thought of it twenty and more years later. These things were so deep and wonderful that they could bear telling a thousand times a thousand times. But he could not say them even once to his sons, for they did not know Farsi, which he had almost forgotten, and his Hebrew was of the shacks and hot streets and blood-guttered markets . . .