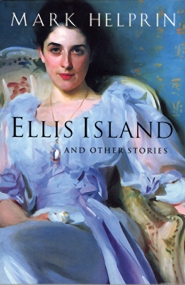 In January, when the sea is cold and dark, crossing the Atlantic is for the brave. Seen from land during the day, the ocean is forbidding, but it is nearly unimaginable at night in a storm, far north, where the ice tumbles down gray wave troughs like tons of shattered glass.

Our hearts were suspended and we held our breath. We tiptoed around, trying not to make too much noise, so that we would not upset the sea or overturn the ship with a sudden movement. We felt that if we ourselves were silent and orderly, the sea would follow our example, and so mothers repeatedly hushed their children, everyone sat with a peculiar stiffness, and many a conversation was left dangling when the ship rolled way over to one side and paused there as it decided whether or not to return.

The quieter we became, the more the sea grew wild. In nocturnal storms from Iceland to Newfoundland, it seemed as if the world

were lit by the electricity of the sea itself. Snow batted  against the ship’s windows, and white dragons leapt into the air as breakers struck the bow. When lightning bombarded the waves through the driving snow, its fractured light illuminated the shadowed snow-flakes and made them seem like endless numbers of angels propelled and directed in a dreamlike war.

I was offered money to read prayers, but I refused. The Talmud and the body of prayer, by their own decree, must not be used as a spade to dig in the ground, and, besides, when the ship swayed in storms, reading made me dizzy.

“If you won’t read prayers for money,” some of the passengers asked, “will you read them for free?”

I told them that I never ask God for anything whatsoever, since I assume that He will give me exactly what He sees fit.

“Isn’t there a prayer for those who are lost at sea?” they wanted to know.

“Certainly,” I answered. “There are scores. I myself know about a dozen.”

“Well then say them!” they screamed.

Somewhere in the North Atlantic we encountered a storm that smashed windows on the upper decks, tore away half the lifeboats, and sent seawater cascading down the companionways. We heard bolts snap and we saw metal beams free themselves from their attachments. The lights went off, and though at times we were nearly upside down in the dark, no one spoke or cried out. We began to think of America, still several days off, as a wild concoction of physical laws where we would have to live permanently on raging seas in the flash of lightning and the swirl of snow. We imagined that if we built houses there, they would blow away, that we would spend our lives holding on as the floor tilted and the lights went out, that America was a place of large dark rooms in which several hundred people lay frightened to death with their eyes as wide as small plates. When suddenly the lights blinked, I saw momentarily a field of bodies -- men in sheepskin coats and furs, women with shawls over their heads, sleepless children lying perfectly still in imitation of their elders -- and everyone was looking at the ceiling, waiting for the water to burst through . . . .