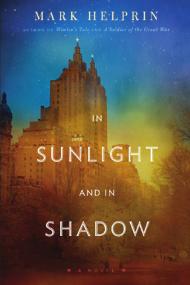 The back story is memory. In Sunlight and in Shadow is about New York in the Forties, a world unto itself; about the rise of its immigrants, and their predominantly generous reception by the Episcopalian aristocracy in the midst of its own decline and adaptation. It’s about the surf-like sound of the streets of Manhattan; the golden age of the American musical theater; the great houses and families of Sutton Place and Eastern Long Island; and the lofts and workshops of the Garment District. About financiers in offices almost floating in the clouds above Wall Street, and the descendants of black free-men and Puerto Rican cane cutters, working in the leather trades. It’s about the Hudson Highlands; a destroyer moving through smooth seas in the Bay of Biscay; the 82nd Airborne shot to pieces by our own guns during the invasion of Sicily. It’s about the ineffable quality, power, and charm of a woman’s voice; about a soldier’s infatuation, at a Kensington dinner party, with a woman he will kiss on the street, and never see again. It’s about men lost in battle, the continuing devotion of soldiers who were with them, and the love of widows and parents who were not. It’s about love unrequited; love burnished to a dull shine by decades of marriage; and young love inimitably fresh and potentially ever

lasting. About parachuting into and fighting through France with the Normandy Invasion; about snow, death, and visions upon the Siegfried Line; sailing in the Atlantic off Mount Desert Island; San Francisco and the sun-saturated Sacramento Valley right after the war; the steel mills of Gary Indiana; the daring of a returning soldier who refuses to be intimidated by the Mafia and chooses instead to fight; the wrenching memories of a field station nurse in the South Pacific; the beauties of color and song; the price of honor; a marriage made in heaven; the extraordinary courage and perseverance of a young actress fighting against great odds; and how the price of war is paid long after war’s end. It’s about the seasons, the blooming of trees in spring, storms at sea, and the golden light that settles upon the harbor when the sun shines beneath a low ceiling of dark cloud. It’s about the wonderful bustle of restaurants and “the wash of sound coming from the bar” (after Carson McCullers). Even about clothing, and how it is linked to emotion when it becomes a part of the people we love. About sex in its purest, strongest, semi-hallucinatory, transcendent manifestations. It’s about love, loyalty, constancy, beauty, justice. And then, it’s just a love story – about Harry; and, most of all, Catherine, whose radiance as a child, a girl, and a woman never dimmed. All of this, and a great deal more, springs from the sight of a beautiful young woman, dressed in white, on the Staten Island Ferry, at the beginning of summer, 1946.
I wrote this book as what Norman Maclean called “a love song for my family,” and because I wanted to go back to what I remember first and best. To do so, it was necessary to set the scene in the hope that it would come alive. . . .