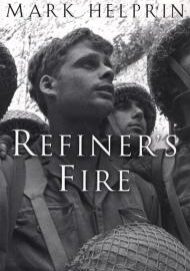 It was one of those perfectly blue, wild days in Haifa when winds from Central Asia and the eastern deserts come roaring into the city like a flight of old propeller planes. Blue-green pines in the Bahai Sanctuary bent in the tense air, and tourists trooped like pilgrims to the top of Carmel for views both miraculous and mild in a full flood of gentle northern light. Moved by an astonishing high view, the tourists forgot themselves and all the many things which had troubled them. North along the coast, a delicate string of breakers rolled slowly to shore, leaving wind lines on the sea. Far to the north were mountains of white ice, silent and heart-filling. And there was perfect quiet, until suddenly and explosively within the hotel grounds by the promenade, black musicians from America struck up their New Orleans band.

From Mt. Carmel one can see for a hundred miles. Out to sea were ships coming to port and departing, each with prosperous cargo, each like a piece on the board of a naval game. Their progress fit the slurred elisions of the brass, drums, and woodwinds from the gardens, and their wakes seemed to freeze on the surface. The black musicians thought about the view, and the city, and the young country knee-deep in war and grinding along like an awkward but marvelous engine of the past century. It reminded the older ones of New Orleans and Chicago; of the muddy brown barges and steam-ships up from Mexico; of Lake Michigan’s blue, seen from a high building. It reminded them of the trolleys (although in Haifa there are no trolleys), and the old-fashioned graces they had known before America had put on its skin. Because of these affinities they liked the new country-and its people liked them.

A country in war is a country alive. It hurts all the time and is full of sorrow, but is as alive as the blaze of a fire, as energetic and restless as an animal in its pen-full of sex and desires of the heart. The undercurrents are so strong that even the tourists take refuge in a larger view. To the east was a valley of industrial plants and enameled green fields leading to Jordan: feed factories, concrete mills where the stones of the mountains were crushed and beaten, refineries, fields of wheat, long sinuous roads, power cables vibrating like violin strings, and the well-ordered camps of an invincible army . . .